Set acceleration to apply to movement of generated particles.
Specify “Magnitude” and “Direction”.
The difference in acceleration settings for each node influences the acceleration due to rotation, and gravity simply accelerates in the specified direction.

Since the position is being moved, influences from Field cannot be made to influence speeds such as “deceleration”.
The influence period is determined to be from when the node is generated to the end of the node life.

Even if you specify matrix settings from the program to the effect, gravity has no influence and the settings will be the global ones. 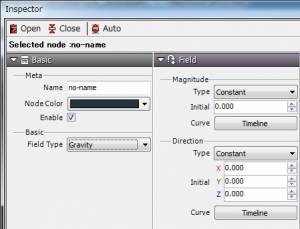 Set the magnitude of the gravitational acceleration.

Set the direction of gravitational acceleration.