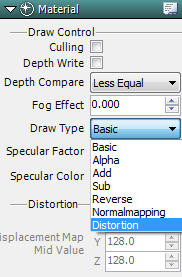 The basic setting method is in “Material” on the previous page.

■Can Distortion be Adjusted?

The R and G colors in the horizontal direction（R) and vertical direction（G）are the elements of variant mapping and simulate and generate the shape deformation.
With the texture color scale, every color（RGB) in a texture can be adjusted.（For example, reducing the overall texture G value to 0.5（50%）
By using the texture color scale, a texture applied for variant mapping may be adjusted.

Example: With time the distortion is applied, the image deforms, and then returns to its original state.

１）Prepare the image to be distorted for Texture 1.
２）Prepare the variant map to distort for Texture 2.
３）Set Material to “Distort”.
４）Set Color Scale for Texture 2 to “Curve”.
５）Depending on the curve, change the R and G values from 0 to 1 and back to 0.

It is possible to adjust the distortion as described above. 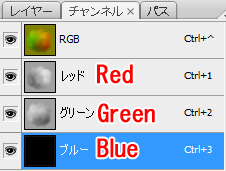 With a displacement map for distortion, how much does the texture UV get displaced?
The data below shows changes in the R and G channels and how much they get moved and in which directions. 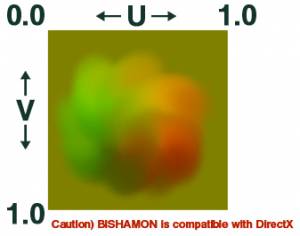 U moves to the right further from 0.0 and closer to 1.0（in the positive direction).
For textures of polygons, the pictures move in the opposite direction to the left.

V moves to the down direction further from 0.0 and closer to 1.0 (in the positive direction).
For textures of polygons, the pictures move in the opposite direction to the left.

Checking with the displacement map, the center value is 128 and looks as follows.

For the R channel, since the right side has become lighter U has moved to the right (in the positive direction),
the texture appears to have shifted to the left, and, since the left side has darkened,
there was opposite movement toward the right.

For the G channel, since the upper side has become lighter V has moved in the downard direction (in the positive direction),
the texture appears to have shifted up, and, since the lower side has darkened,
there was opposite movement in the upward direction.

Accordingly, the texture in the displacement map appears to move like this.